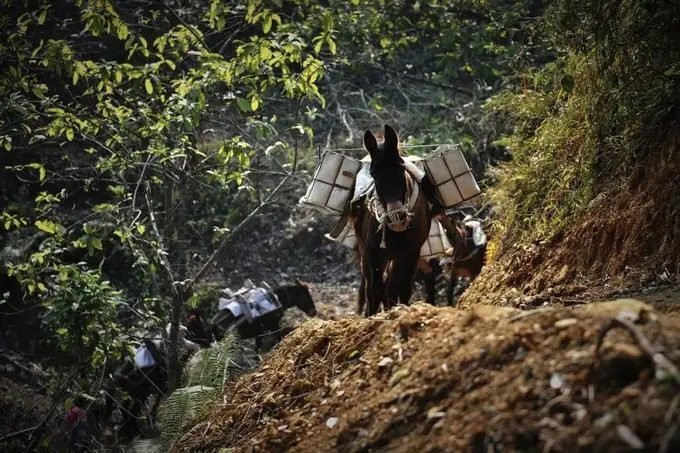 The Tea Horse Road is the most famous trade route in Chinese history.It was used for exchanging tea leaves (tea cakes) for strong horses,which were then used in battle or as transportation.

What is The Tea Horse Road?

The Tea Horse Road (or chamadao 茶马道,Ancient Tea Horse Road 茶马古道) is a journey that begins in southwest China between the Hengduan Mountains and Tibetan Plateau, travelling through Sichuan Provincial's capital of Chengdu and Ya'an before reaching Yunnan's Pu'er and ending in Lhasa in the Tibet and other places in Southeast Asia.The Tea Horse Road is a vital means of trade between the Han Chinese and other ethnic minorities in China.It served as an important artery for economic, cultural exchanges among all those who live on among the various ethnic groups in southwest China. Origin of the Tea Horse Road

Tea has been around for over 2,000 years and was first consumed as a beverage during the Western Han Dynasty according to history records in 59BC.The Tang Dynasty (618-907 AD) is widely credited with spreading tea,its popularity was among both northern Chinese and people from farther west such as Uighurs then.The Silk Road was an ancient network of routes that stretched from China to Central Asia and beyond.Tea,silk and porcelain were key commodities exported from the ancient Chinese capital of Chang'an (长安)  by caravans following several transport routes.Tea had been carried by traders along the Silk Road into Tibet, central Asia or southern Asia for centuries before it was officially recorded in Tang Dynasty.Tea-horses are a unique form of transportation that was used for transport in ancient times,which was considered as the beginning of “the Ancient Tea-Horse Road”(茶马古道,referred as ATHR).

Development of the Tea Horse Road

The Tea Horse Road developed as an important ancient commercial trade route in China's history,which was as important as the "Silk Road". After Tang Dynasty,it has evolved through the following dynasties: Song,Yuan and Ming to Qing Dynasties!The Song Dynasty(960-1279AD) started with the Tea and Horse Market in exchange of tea for horses.In the Yuan Dynasty, tea has become an important commodity for all Chinese ethnic groups to trade with each other, tea trade and communications between difference races in ancient China are also more frequent.

In the Ming Dynasty (1368-1644AD), Xie Zhaozhe(谢肇淛,1567-1624AD) as high rank provincial official of Yunnan in 1618 in his works The Strategy of Yunnan(《滇略》) said that  "Puer tea were drunken by both the gentlemen and average people",which showed how popular Puer tea was then. The Ming government set up official mission to manage the tea trade during the Wanli Period of Ming Dynasty（1563-1620AD).

In 1661, during the Shunzhi Period of Qing dynasty, 30 thousand packets of pu'er tea were sold to Tibet by horses from Pu-er,Yunnan.The Tea Bureau in Pu'er,Yunnan was established by the Qing government to regulate and monitor all tea trading. All traders needed an official license from the government before they could start their tea business - it's called "Tea Guide".The 1821-76 period saw the formation of a "Tea Trade Road" in Simao,Yunnan.Many Pu er tea merchants gathered there, more than 1,000 Tibetan traders traveled through this route every year and Indian merchants joined them for trade activities there too!As a result,the South Yunnan Commercial Route has formed a "Tea Trade Road”.The “ Tea Horse Business Road”, linking the towns of Xishuangbanna and Pu'er in south western China is an exceptionally prosperous place. The merchants from India, Burma, Siam,Vietnam,Laos & Cambodia have made this journey time-and again to sell their goods which create opportunities for both trade as well generation over generations.

Today of the Tea Horse Road

The Tea Horse Road has been an ancient path for transporting goods since before modern transportation became popular. Today, it is still one of the only ancient ways to get some daily necessities from place-to-place for remote southwest China with its unique charm and history that cannot be found anywhere else!