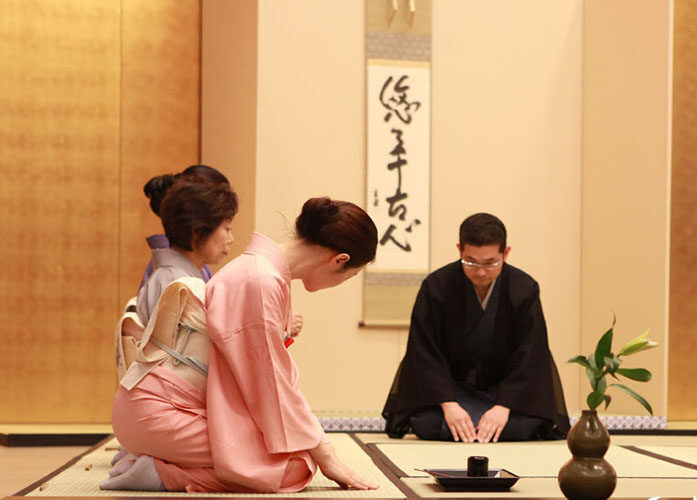 The Japanese Way of Tea

"In the fifteenth century," says Okakura Kakuzo（冈仓天心）, “Japan ennobled tea into a religion of estheticism—teaism".

The Japanese had been drinking tea for centuries before the Heinan period(平安時代,794-1159AD). However, it wasn't until this era that a regular ceremony began to be associated with their beverage - one which contributed greatly towards Buddhism and cultivated an artistic spirit within Japan's emperor family tree lineages later producing some of history’s most brilliant Court Nobles along side literature worthy enough never forgettable works.

"Hot water tea"（Chanoyu in Japanese,茶の湯） is a phrase that has been passed down through generations of Japanese people. The first meetings were held in the temple groves, where everything seemed to have its perfect balance with one another; however when transported into towns there was an attempt made at simulating natural surroundings by celebrating this ceremony inside little rooms set apart from gardens.The philosophy behind the tea room at Rikyu's school (Rikyu 千利休 is the founder of the Japanese of the most popular school of Chanoyu) was to create an environment where guests could enjoy their time without distractions, and focus on performing simple movements in accordance with strict rules. This led them towards creating "Teaism," which represents much of what is considered artful about Japanese life.

Teaism is a religion that worships the beauty of nature and simplicity. It's reflected in their porcelain, lacquer,painting or literature where they teach purity,harmony and mutual forbearance.The Japanese speak about individuals having "no tea" when he doesn’t understand its finer things in life. And the esthete is sometimes said to have "too much tea in him".Teaism is the art of concealing beauty that you may discover it, and dare to reveal. It's a secret only revealed through laughter--the noble kind which comes from sharing your own wit with others without judgment or preconceived notions.

Chanoyu,also called Sado or simply Ocha in Japanese and sometimes referred to as "the tea ceremony," is a choreographic ritual of preparing and serving Japanese green tea, called Matcha together with traditional sweets to balance its bitter taste.The process centers on pouring all one's attention into predefined movements while preparing the bowl from heart; it isn't just about drinking bitter green leaves but rather achieving deep spiritual satisfaction through contemplation--and thus what makes this experience so special!

The preparation of Japanese tea is a very simple and basic procedure. There are many different ways you can prepare it, depending on your preferences or the level of formality for an event that will be drinking them! One way would include:

The host needs to send formal invitations and prepare his/her soul for the ceremony by leaving behind all worldly thoughts. He or she can do this by just focusing on obtaining a certain harmony within themselves, which will lead up into feeling equilibrium after being in preparation mode long enough! The practical steps involve choosing tools depending what season it is during the day the ceremony will take place.The host cleans the tea room (garden, if it's summertime),the tools and changes out tatami mats. If there will be a meal involved with the ceremony than they need to start preparing early in order for everything go smoothly!

When guests enter the tea room or garden where their ceremony will take place, they have to wait for a signal from Host. The guests must leave behind all thoughts of the world before entering a tea room. They do this by washing their hands and bowing to show respect for both host but especially what they're about enter: A place where peace awaits them, cleansed from any dust or worries that can distract attention away form its true purpose - reflection on one's inner self through meditation!

The preparing of matcha doesn't start until the host brings in their tools and cleans them with concentration before using.The cleaning process is aesthetically done with concentration, highly graceful movements that differ from one ceremony to another but always maintain a sense beauty through posture as well as what's happening around you at this time - no unnecessary words or actions should be allowed during these moments because all aspects including your behavior has been tuned by tradition so they can flow together seamlessly without any disruptiveness whatsoever!

The preparation of matcha begins with the tools being perfectly clean and aesthetically displayed. Usually three scoops are added to each guest's bowl, which is then whisked into a thin paste before adding hot water!

When the host presents their prepared tea bowl to a main guest, they exchange bowls and take drinks. This first person admires then rotates it before taking another sip from its rim.The guest wipes the rim of his tea bowl and offers it to next person in a pristine fashion,which is repeated until the last guest is handed their drink, they pass it back to the host.

The host cleans the tea tools after every guest has taken a sip. They carefully and respectfully inspect them to show how much respect they have for their hosts, even though it's just an ordinary ceremony! The hosts carefully and respectfully examine the utensils using a cloth when handling them with extreme caution. After this phase is over, they gather all of their tools for an even more impressive presentation! And then the guests exit to complete another bow in gratitude.

*** If you are interested in purchasing good quality Chinese tea and Chinese Matcha as well as other tea powder, please kindly visit admiringazeland.com.