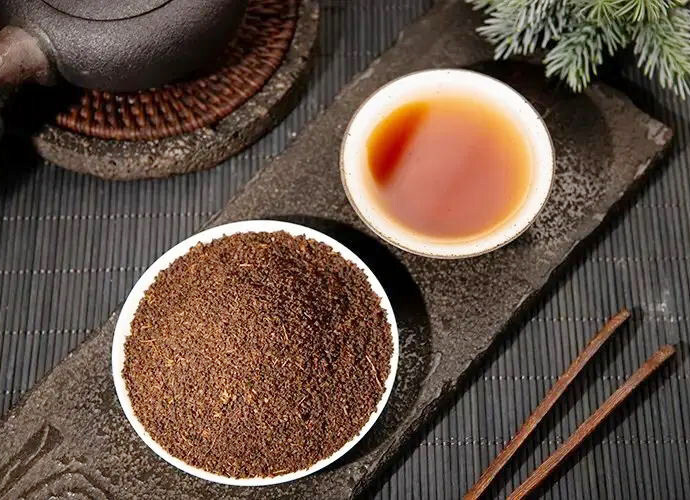 What is a Good Chinese Black Tea-Series 2

Black teas are often rich and intense, thanks to their high polyphenol content. This is why China's large leaf variety tea plants make such delicious black blends that pack a powerful punch of flavor when it comes to evaluating quality for this type beverage in countries where milk or sugar may be added! Black teas are rich in polyphenol content and can have a much richer, more intense flavor than green or oolong varieties.

The leaves of this tea are rich in white down and give it a refreshing appearance. When these large variety varieties are moderately oxidized, they develop an amazing color that is golden-peachy with some black mixed into them! This type has been given the English name "Golden Pekoe" which means just what you think - fine looking cup after drinkable experience awaits your taste buds."

The first Black tea Lapsang Souchong has been around since the 17th century when it first originated in Wuyi Mountain area of Fujian,China. Two world renowned types, Keemun and Yunnan Dianhong black teas were born later - however they didn't become popular tastes until much later on due to them not being widely exported outside their native country or region until then (18th/19th centuries). In addition there's also small amounts produced locally by Taiwan which contain higher levels of caffeine than most other areas across China such as Hainan Island, Guangdong province etc.

Black tea is often classified into two categories based upon how it looks: 'Strips Black Tea' and Broken Black Teas.The global tea industry is currently dominated by black teas. There are four main types:Leaf Tea (OP,FOP), Broken Black Teas(FBOP,BOP),Fannings(BOPF,F)and Dust(D).With the broken black teas being a popular option for those who want their tea bagged and brewed quickly, they're an excellent choice when you need mass production.The traditional black teas include Souchong and Gongfu tea. Lapsang Souchong is represented by both smoked and unsmoked varieties, while keemun from Anhui or Dianhong of Yunnan as well as Chuanhong black tea from Sichuan Province are popular stripe gongfu black teas.The standard Lapsang Souchong black tea has been smoked and dried over pinewood fires to give it its smoky flavor. Gong Fu tea, on the other hand does not use smoke-dried leaves so their name stems from refined methods in which they are brewed - Gong Fu cha!

Broken black tea is a great way to answer the international market's demand for low-priced products. In former times, large scale plantations were used by Western countries which led them into forming an enormous industry of their own in this area.When the international market needed low-priced products, there was once only small scale production for the stripe teas. With Broken Black Tea's development in countries like India and Sri Lanka that have large populations who love tea; an enormous black teas industry formed as well! Now China also developed sound broken black tea production in Yunnan and Sichuan,etc.

For black tea,there are two major processing methods.The traditional Orthodox method is still used in China and India to reduce the moisture content from 78-80% when plucked down 55%-70%. On the other hand CTC has been introduced by companies around Asia with an emphasis on faster turnaround times which leads them not waiting for up 18 hours before rolling out their leaves.

When the leaves are ready, they're soft and pliable. They go into a special rolling machine that presses them together with enough force to break cells inside of these pieces while releasing natural juices or chemicals which start oxidation process--and voila!After the first roll, some of those smaller pieces are sifted off and put back into a roller for another one or two goes.

The leaf is put through a Rotorvan machine to maximize production of smaller broken grades. After rolling, it's broken up and spread out in thin layers under cool humid air and left to oxidize for 20-30 minutes or longer depending on the conditions with an emphasis placed upon temperature control as this impacts oxidation time greatly - ensuring maximum aroma diversity!

The leaf now has a more developed aroma and flavor, it's darker in color due to all of the chemical reactions happening on its surface. The tea leaves are fed into large automatic dryers where they're heated up with hot air streams at temperatures of 115-120°C (240-250°F). This reduction process reduces moisture content from 3% down closer 2%, ensuring an even distribution throughout each layer for optimal maturity taste.

The CTC (Cut, Tear and Curl) method of manufacture is a major tea-producing countries' way to create small leafed teas that yield stronger liquor. This process was developed in the 1950s when people started drinking more cups per day with tea bags.The process of making black tea starts with withered leaves that are macerated by blades in a CTC machine or an LTP at different speed,which causes it break down into tiny particles.The remaining oxidation and drying stages of the process are the same as for orthodox black teas.

The ophylline in black tea can absorb heavy metals and help expelling toxins. It contains polyphenol, saccharides (sugar), amino acids which stimulate saliva production to secrete outwards or upwards towards the mouth due its stimulating effect on spittle glands inside your brain thirsty nerve centre where they play an important role when drinking any kind beverage but most importantly if it's caffeine-based like our favorite morning drink; brewed exactly how you want.

The finest black teas include Keemun, Dianhong Golden Tip and Lapsang Souchong. The different tea shapes result in a variety of requirements for the perfect brewing and serving set. The Keemun Black Tea features treasure light, gold halo, and brilliant red soup with its garnish being appreciation from British royalty as well! This type should be brewed using in fine porcelain tools so that you may enjoy this exquisite flavor at its full potentials-preferably served alongside some sandwiches or muffins along side fresh milk + lemon juice added right before drinking time ends.

*** Our site admiringazeland.com is specialized at offering the good quality Chinese teas for you.

Previous Previous post: What is a Good Chinese Black Tea-Series 1
Next Next post: A Cup of Tea Short Story